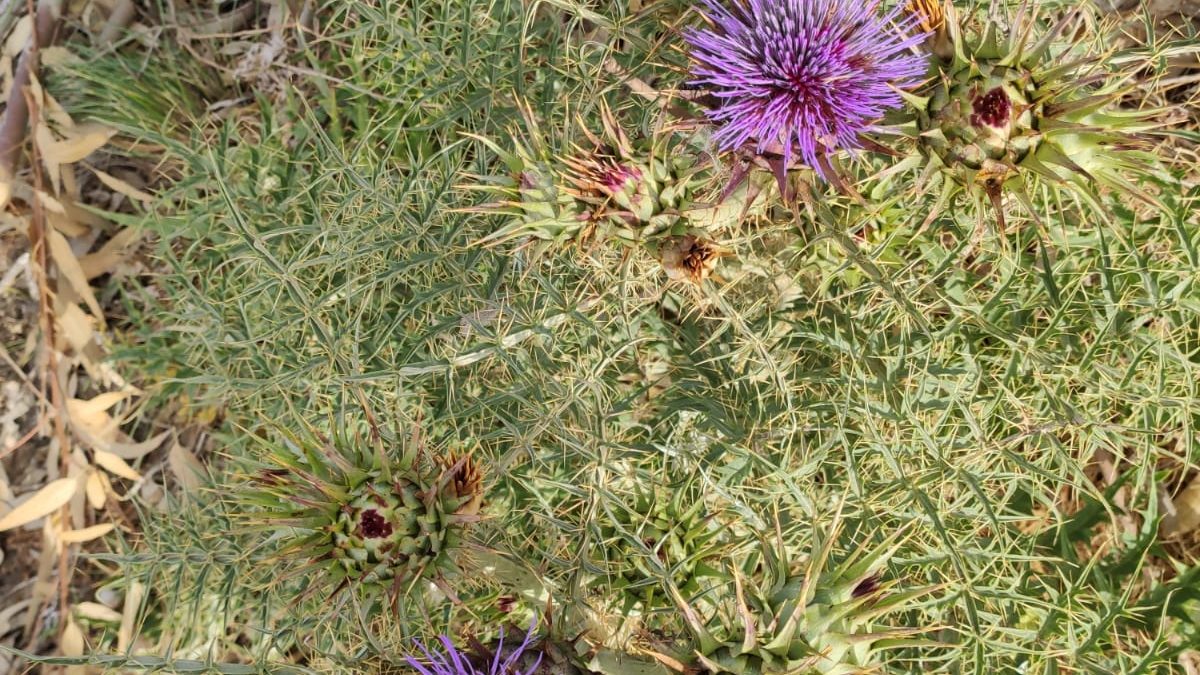 The surrounding garrigue’s spring greenery has given way to grasses and dry patches of plants. Yet, the purple blooms of the Wild Artichoke (Cynara cardunculus, Qaqoċċ tax-Xewk) still add some colour to the landscape.

The Wild Artichoke, is a thistle-like plant, part of the sunflower family of plants, found naturally in the Mediterranean region. The plant is actually the wild variant of the edible Globe Artichoke (Cynara scolymus, Qaqoċċ). The wild plant is easily identifiable from the cultivated globe artichoke because the former has a spiny appearance and the flower buds of the wild plant are smaller in size.

The Wild Artichoke is actually adapted to our hot, dry summers, in fact it is native from Morocco and Portugal in the east, Libya in the South, Greece in the West and south France and Croatia in the north. It is a herbaceous perennial with rigid spiny leaves to deter herbivorous animals. Growing up to 1m in height, the violet-purple flower heads appear solitary or on branched stems. The flowers attract a large number of pollinating insects, ranging from wasps, bees, beetles and more.

This plant, with edible flowering buds and stalks, was already used in cooking in the 4th century BC by the Ancient Greeks. It was a popular ingredient in Greek, Roman and Persian cuisine. It is also said that traditionally in Malta, the wild artichoke leaves were used for medicinal purposes as a tonic against fever. The wild artichoke is also used a digestive or in liquors.

At The Cliffs, the cultivated globe artichoke features in one of the refreshing starter dishes, alongside typical local Maltese produce – sundried tomatoes, capers and olives. To learn more about the seasonal flowering plants and the gastronomic use of certain local produce, check out our other articles