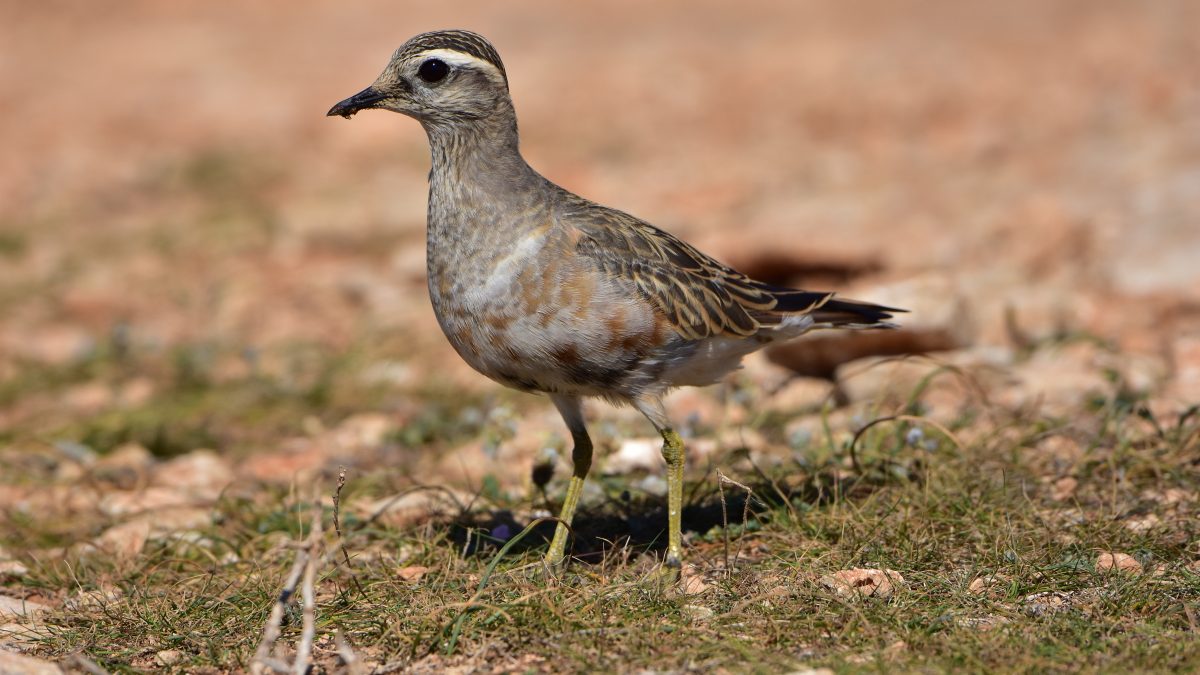 Observed: Mainly in Autumn, however is also seen in Winter and Spring

Description: The Eurasian Dotterel is a small long-legged wader of the plover bird family, about 20-22cm long with a wingspan of 57-64cm.

Population: The population size is very large, and hence does not approach the thresholds for Vulnerable under the population size criterion (<10,000 mature individuals with a continuing decline estimated to be >10% in ten years or three generations, or with a specified population structure). For these reasons the species is evaluated as Least Concern.

Ecology: This species is fully migratory and travels non-stop on a broad front across Europe, staging first at a number of traditional sites. It departs from its breeding grounds from August to September, the return migration in the spring beginning in late-February or March. The species breeds from May to August in solitary well-dispersed pairs.

Behaviour: There is a sexual dimorphism in the size and plumage of the dotterel, since the female is larger and brighter than the male. This species shows a reversal of sexual roles; the female attracts a mate through its plumage displays, while the male helps incubate the eggs and tends the young chicks.

Breeding Habitat: The species breeds on flat open uplands, on mountain ridges and plateaus with sparse vegetation, and on coastal and inland Arctic tundra of moss, short grass or lichen and bare patches of rock.

Diet: Its diet consists of insects, (mainly beetles, grasshoppers, crickets, and ants), spiders, snails and earthworms, as well as plant matter such as leaves, seeds, berries and flowers.

Breeding site: The nest is a shallow scrape on bare ground or in short vegetation. The species is a solitary nester but where suitable habitat is restricted it may also breed in loose groups of 2-5 pairs.

Main threats: Some of Scotland’s most popular birds are suffering a severe drop in numbers, a study has revealed:

Scientists from the RSPB, Scottish Natural Heritage (SNH) and Natural Research have revealed the startling decline in bird populations in the State of UK Birds 2013 report. The mountain species dotterel (Charadrius morinellus), one of the rarest breeds in Britain – with two-thirds living in the Cairngorms – has declined by about 40 per cent in just over a decade. The results found that the estimated number of dotterels had fallen from 630 breeding males in 1999, to just 423 breeding males in 2011, continuing a longer-term decline since the first survey in 1987-88, which estimated the number of breeding males at 981. Mark Eaton, of RSPB, said: “Scotland’s Highlands provide an important home for dotterel and the species’ presence offers a good indicator of the health of our mountain landscapes. To see such a significant drop in their numbers over the past three decades is deeply concerning.

Eileen Stuart, SNH head of policy and advice, said: “The declining numbers of some birds, particularly the drop in dotterels, is obviously very worrying”. Colette Hall, a species monitoring officer with the Wildfowl and Wetlands Trust, was concerned that the figures show the breeding ranges of waders are drastically shrinking. She said: “We’re losing much-loved species like snipe or lapwing completely from parts of lowland Britain. The list of countryside birds which are declining also includes willow tits, cuckoos, whinchats, starlings, wood warblers and yellow wagtails.
Source: The Scotsman, 9 December 2013

In northern England, a historical decline since the mid-nineteenth century has been attributed to overgrazing by sheep causing a degradation in the quality of breeding habitat, although pollution and human recreational disturbance may also be involved in preventing a recovery (Galbraith et al. 1993). The main threats for the species are loss of habitat due to alteration in mountains,-the construction of ski stations, tracks and urbanization.

Latest encounter along The Cliffs Trail: Sunday 4th October 2015, two hunters along the Cliffs Trail at Dingli Cliffs managed to take some photos of the wonderful bird, which rested for some time in a field prior to continuing its journey.