The Dodder – One of Malta’s Parasitic plants 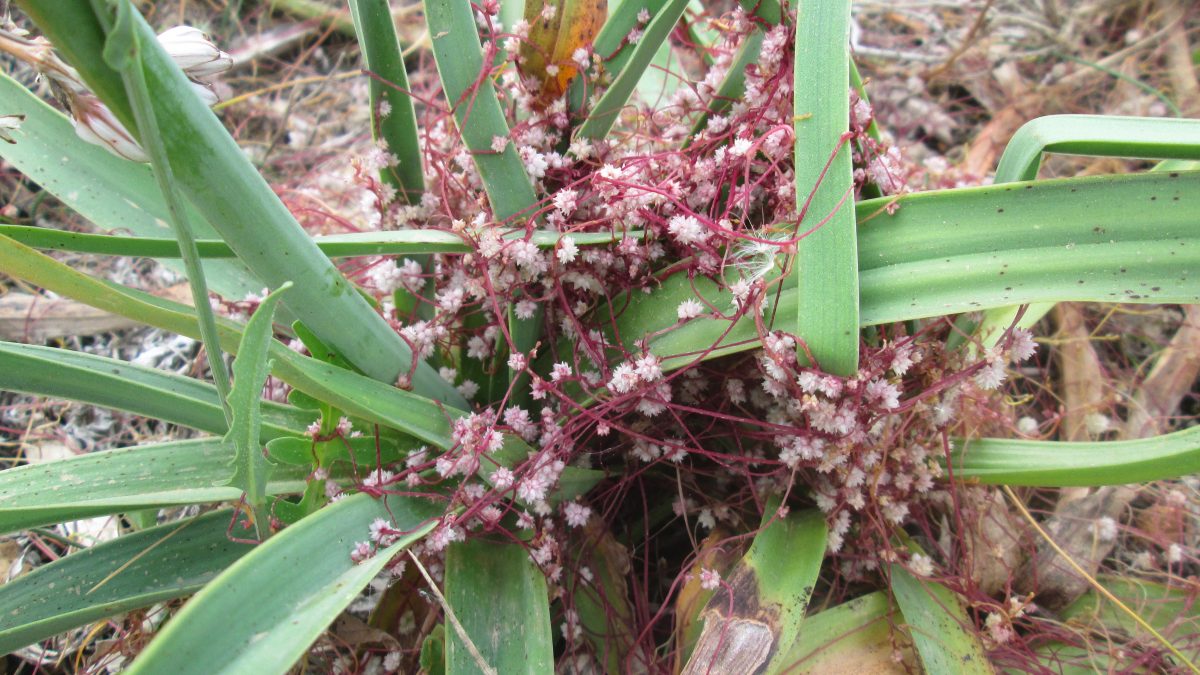 Parasitic plants need a host plant to provide them with the necessary water and nutrients for survival.
The frequently encountered Dodder (Pittma, Cuscuta epithmum) is a parasitic plant which is found almost throughout Europe. The dense mass of long, thin, red stems with no leaves atop another host plant make it easily identifiable in the garrigue landscape. The plant doesn’t have roots of its own, so it penetrates the stems of a host plant by entwining around it to steal its water and nutrients. The red colour of the dodder’s stem is an indication that it has little to no chlorphyll with which to produce its own nutrients. In the Maltese Islands, the preferred host plants of the Dodder include the Mediterranean thyme, spurge, asphodel and sea squill.
The flowers are very small, about 5mm in diameter. After being dropped to the ground, the seeds can remain dormant for up to ten years before they find a host plant and are able to germinate. Even the seeds are very small, but they produced in large quantities so their chances of germination are enhanced. Two other rare species of the Dodder in Malta are the Field dodder (Cuscuta campestris) and the One-seeded dodder (Cuscua monogyna).
Apart from the dodder, another common parasitic plant that can be found in the Maltese Islands is the Broomrape (Budebbus, Orobache spp.), with more than 12 different sub-species, all which parasitize the root of their host plant, often agricultural crops in cultivated fields such as legumes and carrots.
Among the thousands of parasitic plants that found in the world, few hold historical and scientific interest. In the Maltese Islands, the Malta Fungus (Għerq Sinjur, Cynomorium coccineum) is parasitic on several succulent shrubs which grow in saline coastal areas. Although it is very rare in the Maltese Islands, it grows in other Mediterranean areas. In the past, its presence was limited to Fungus Rock in Gozo, causing much interest by the Knights of St. John, who valued it for its medicinal powers. They introduced the plant to the European medical practices of the time and even traded the plant powder for the cure of various ailments. Today, although still rare, colonies of this parasitic plant were found present in a couple of colonies at Dingli Cliffs, below clay slopes in certain sections.