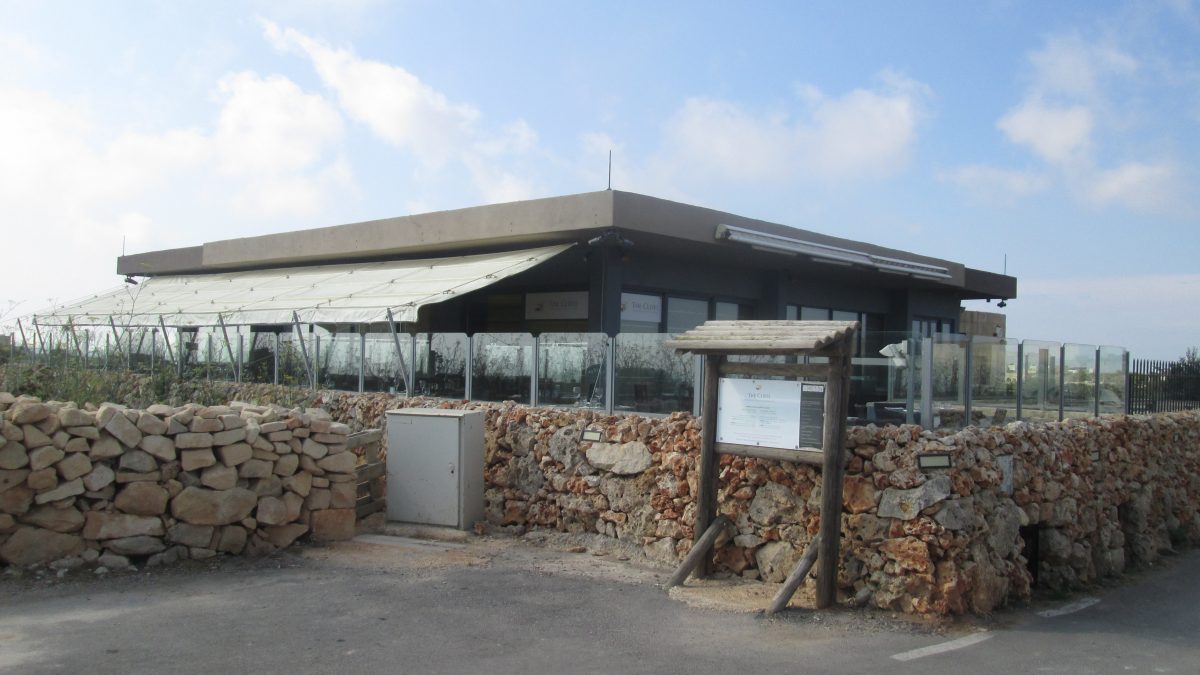 The building which houses The Cliffs Interpretation Centre had been a derelict 1960s building built during British rule as a TACAN.

Primarily, in the construction phase of the building, the socio-cultural characteristics were respected since the creation of The Centre did not take ‘new’ land but was incorporated into a totally committed area which houses the 1960s building. When La Pinta Ltd. took responsibility of the site, an official outline permit for two floors existed. However, the full development application submitted by La Pinta Ltd., was for one floor as suggested in the Environmental Study. This is rare, if not the only such case in these Islands.

Moreover, about 15% of the previously concreted land was converted into productive soil; this now houses the small vegetable and herb garden.

Back to the drawing board…sun, wind and humidity

In the early planning phases of The Cliffs Interpretation Centre, the climatic conditions of our country were taken into consideration, always in line with seasonality.

The Maltese Islands are windy and only about 7% of the days within a year are calm. The two prevailing winds are the Northwest and the Southeast and The Centre factors for these predominant directions by having two low windows integrated in the external walls, where wind is channelled through louver windows inside the lecture room, which used to be the generator room of the 1960s building.

Since the Maltese Islands receive a great deal of sunshine throughout the year, the cantilevers facing the south have been projected to a considerable span to gain winter sun, whilst protecting against summer sun. The building is surrounded by double-glazed large glass apertures which while reducing energy losses, they reduce the need for electrical lights. Apertures facing the North are in the shade all year round and hence, they were designed with small apertures accordingly.

To account for humidity, all new structures are elevated and with total void areas; during summer, the channelled wind acts to cool the mechanism.

Most of the Globigerina Limestone used for the building was brought from rubble mounds dumped illegally in the countryside. The nine inch standard size of the building stone serves to stabilise internal temperatures, whilst the limestone forms a hard crust when weathered, thus insulting the building in the north-facing sides of the building.

Water is a fundamental but scarce resource in the Maltese Islands. To this end, water tanks have been placed in the stepping area of the building to conserve rainwater. To the maximum extent feasible, the building depends on water that is collected, used, purified and re-used on site. Water is not only collected from the roof but also from decking areas.

The reduction of all waste was considered not only in the construction phase but also in the daily operations of The Cliffs Interpretation Centre. In the construction phase, all material found on site were recycled including, rubble walls, remaining window apertures and iron railings. During its day-to-day operations, the Centre recycles material into waste separation bins.

All light fixtures are energy saving. Moreover, light pollution was considered during design. As The Centre is located next to the cliff edge, special attention was undertaken so as not to disturb the seabird colonies. Down lighters and cut-off systems are also employed.

Although the Centre is not a Non-Governmental Organisation, it is a self-sufficient entity which has been focusing on conservation and management of the protected area from its inception. The Cliffs Interpretation Centre does not ask for financial capital to continue preserving the natural environment and providing means of education and recreation to visitors; instead it has maintained its autonomy.