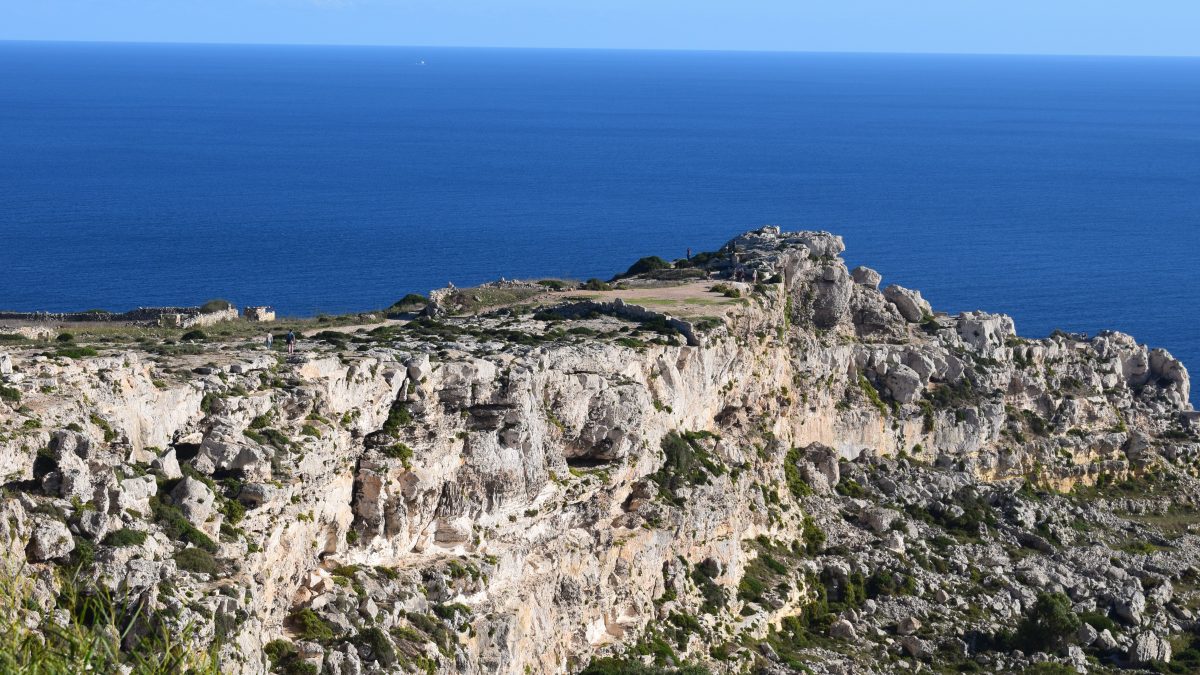 The first defensive settlements in the Maltese Islands date back to the Bronze Age, between 2400BC and 800BC. After the collapse of the Temples culture, the Bronze Age was characterised by new settlers who imported bronze, an important commodity. The importance of possessing bronze could have possible led to friction with different races fighting each other. Upon settling in the Maltese Islands, specific areas with adequate defence were chosen as new settlements.

From a community which practised cremation burials such as that of Tarxien Cemetery, the second period of the Bronze Age is associated with small settlements on flat-topped hills, mainly characterised by a defence system of walls – a primitive version of fortifications.

One of these settlements is that of Wardija ta’ San Ġorġ, at the promontory of Ġebel Ċiantar, which offers one of the best viewpoints of Dingli Cliffs.

The geomorphology of the area has been crucial in its use as a settlement during the Bronze Age. The promontory of Ġebel Ċiantar formed as a result of the crossing of the Magħlaq Fault system with a northeast trending fault. Furthermore, the underlying fields were supplied with fresh water from the exposed perched water table at the intersection between the Upper Coralline Limestone plateau and the Blue Clay beneath it. The freshwater springs and defensible promontory were noted by people of the Bronze Age, who only needed to protect the landward side from potential enemy attacks. Of the cyclopean wall fortification, made of huge limestone boulders roughly fitted together, only a few stones survive to this day.

The defended area is quite small, indicating that villagers used to live in the nearby fields outside of the wall, but when there was any sign of attack they would find refuge in the fortified area, which would have acted as a citadel/ fortress.

Behind the wall, one can also note 15 Rock-cut silo pits (10 of which are excavated) and hut formations. The rock-pits are typical of the Borġ in-Nadur phase, most probably used as water or grain stores. Small channels cut across the exposed rock face could have been used to transfer water in to the pits. Other similar Bronze Age fortified settlements in the Maltese Islands are that of Borġ in-Nadur (Birżebbuġa), il-Qlejgħa tal-Baħrija (Baħrija) and at In-Nuffara (Gozo).