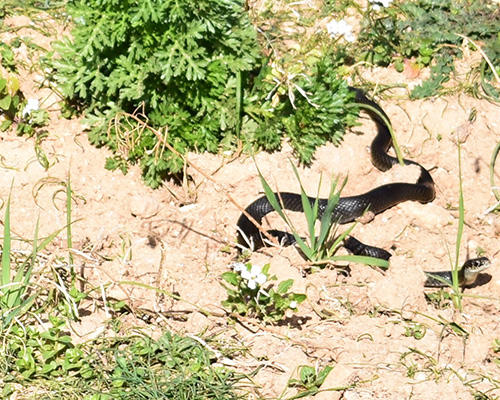 The largest snake in the Maltese Islands is the Western Whip Snake, which can grow up to 1.5m. Known in Maltese as “Is-Serp Iswed”, it is the most common snake in Malta. It lives in dry places along valley sides, maquis and open rocky ground, where it is occasionally found basking on rocks or rubble walls. It usually feeds on lizards, mice, shrews, young birds, smaller snakes, frogs and large insects.

Although some people are afraid or dislike snakes, native reptiles are part of our Maltese heritage and should be safeguarded. The Western Whip Snake, like all native snakes, has been protected in Malta since 1992. One should not pursue, take, kill or keep these fascinating reptiles. According to a report compiled by MEPA in connection with the EC Habitats Directive, the population status of the western whip snake is considered to be favourable and positive trends have been predicted.

Important: Pair was not disturbed