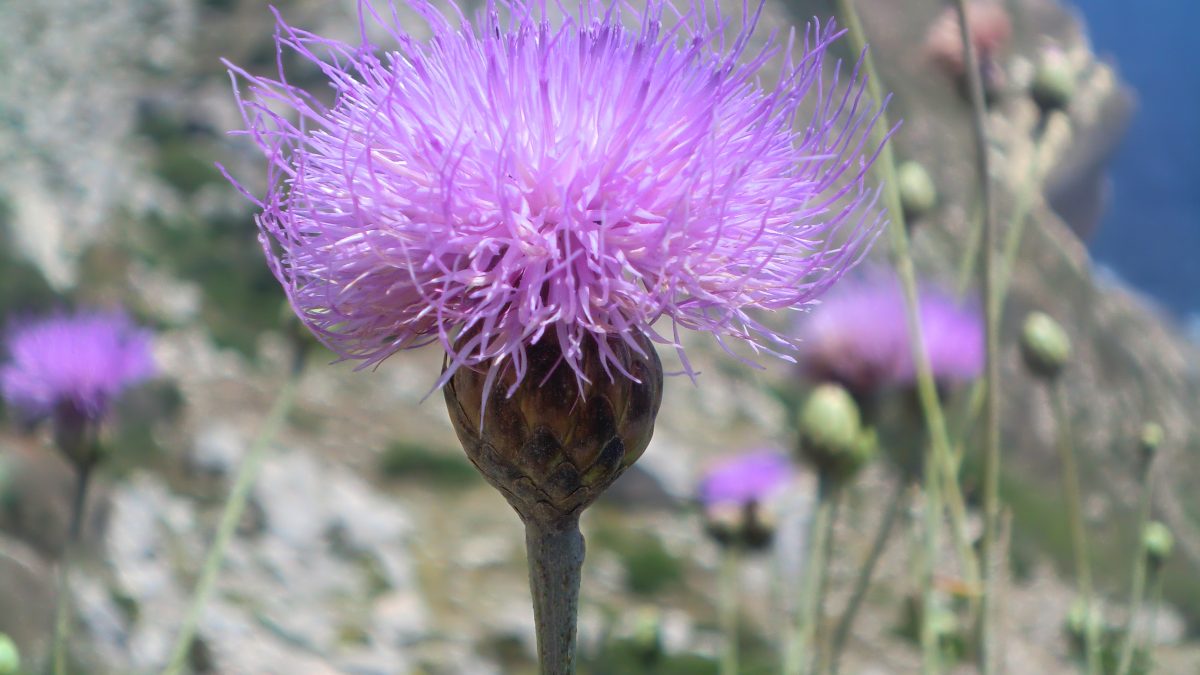 Since 1971, the Maltese Rock-Centaury (Cheirolophus crassifolius, Widnet il-Baħar) has been recognised as Malta’s national plant.  This species is scarce but widespread in certain areas, in fact one of the best and perhaps only places to encounter such plant in the wild is along the western coastal cliffs of Malta, such as those of Dingli Cliffs.

The Rock centaury is actually endemic to the Maltese Islands with related species being encountered elsewhere around the Mediterranean region. This species represents one of the few isolated relict species of the Maltese Islands, probably originating during the Tertiary period (66-1.6million years ago) and surviving only on the Maltese Islands during Halocene glacial events, over 12000 years ago. The Rock Centaury was first recorded in the early 19th Centaury, and given the local name Widnet il-Baħar, locally coming from the word widna because of the elongated spatula-shaped leaves similar to another common fodder plant of the same name, and baħar, since the plant grows near the sea.

The herbaceous  evergreen perennial is actually part of the Daisy family of plants, with the Rock centaury being a plant with stems up to 50cm high. Its violet coloured flowers appear from May to July, peaking in early June as singular thistle-like flowerheads from the erect stalk. The spatula-shaped leaves are fleshy, smooth and semi-succulent. Whilst it prefers the upper parts and edges of cliffs, it can also be sometimes found in coastal valleys or on cliff plateaux up to 50m inland. Considered to be a critically endangered plant, the natural habitat preferences of the Rock Centaury are threatened by the introduction on alien plants, cliff collapse and even human interference. In fact, the wild population of this species is fragmented and restricted to a 25km stretch of limestone coastal cliffs and several valleys. One reasonable estimate as to the individual numbers of this plant is that of 20,000 individuals.  Today, certain species areas of conservation as part of the Natura 2000 network have been designated to conserve this species. Another method to conserve the Rock Centaury has been the propagation of the plant by cuttings and cultivation in parks, roundabouts and central-strips.